Incredible India, land of colors, of smells and of great beauty: India's mix of culture, religion, people and nature are unique. People of different religion live peacefully together and in some cases even share the same church.  This second most populated country in the world will leave a lasting impression on you when you visit.
The Golden Triangle (including the cities of Delhi, Agra and Jaipur) is India's most visited area, and rightly so: the area is well known for its richness in culture and history. The Taj Mahal, the 'Jewel of Muslim Art in India'  a tomb built for the Shah's third wife  for a is just one of the highlights. If you have never been to India before, this is where you should start your journey.

Further down the page: Read about our company * Travel facts India. There is also a map of our country and our latest India travel news.

This email address is being protected from spambots. You need JavaScript enabled to view it. 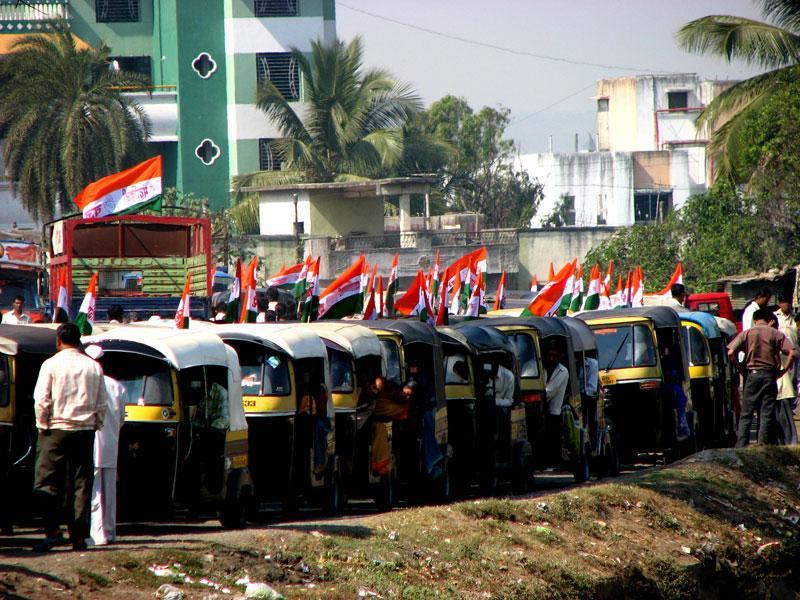 Agra
The old part of Agra is still like a medieval city, with narrow lanes and colourful shops selling local handicrafts, especially gold and silver thread embroidery and imitation Mughal inlay on marble. Agra is a city of architectural wonders and the spellbinding Taj Mahal. This beautiful marble monument, located on a bank of the Yamuna River in Agra India, has inspired poets and lovers throughout the world.

Aurangabad
The city of Aurangabad is known for its medieval monuments and cultural heritage. It was the seat of the Mughal Empire for a short period. The city boasts of Bibi-ka-Makbara, a tomb that has some resemblance to the Taj Mahal. The importance of Aurangabad is great, owing to its proximity with world heritage sites of Ajanta and Ellora. These sites have Buddhist, Jain and Hindu temples. Aurangabad is also famous for its silk and cotton textiles.

Bangalore
Bangalore is the ideal gateway to India and beyond. Literally, the 'town of baked beans' , it's the perfect blend of natural beauty and man-made marvels of architecture and technology. Bangalore, located 1,000m above sea level is one of the most 'happening' places in India.

Bombay/Mumbai
There is a tremendous variety of things to do in Mumbai. It's the glamorous commercial hub of India, a magnet to rich and poor alike, surrounded on three sides by the Arabian Sea. The city was called Bombay for much of the last four hundred years. In India it is the city of gold, of dreams. Bombay does sleep at night, but usually rather late and very briefly.

Delhi
The capital of India presents a captivating combination of ancient and modern times. Both Old and New Delhi exert a beguiling charm on visitors. Lose yourself unwinding the secrets of the city's Mughal past in the labyrinthine streets of Old Delhi before emerging into the wide open spaces of imperial New Delhi, with its ordered governmental vistas and generous leafy avenues.

Jaipur
Jaipur (the city of jai or victory), the capital of Rajasthan, was built in 1728 by Maharaja Sawai Jai Singh II. In honour of the visit in 1883 of Prince Albert it was ordered to be painted the traditional colour of welcome, pink, which has been retained in the walled, old city. The city is best explored on foot and the adventurous visitor willing to go into the inner lanes can discover a whole new world not visible to the tourist-in-a-hurry.

Khajuraho
The period 950 to 1050 AD, a mere 100 years, saw a flowering of architecture in this small village that has no parallel. Of the 85 temples built by the Chandela dynasty 22 survive. These temples are designed to lead one's eyes from ground level ever upwards to the ultimate heaven, Kailash. They are ornately carved, with each frieze and sculpture depicting the genius of the men who carved it and the king who inspired them to their work. A UNESCO world heritage site in central India, Khajuraho is a famous tourist and archaeological site known for its sculptured temples dedicated to Shiva, Vishnu, and Jain patriarchs.

Mahabalipuram
Mahabalipuram draws people its miles of unspoiled beach and rock-cut art. The sculpture is particularly interesting because it shows scenes of day-to- day life, in contrast with the rest of the state of Tamil Nadu, where the carvings generally depict gods and goddesses. The famous Arjuna's Penance and the Krishna Mandapa, adorn massive rocks near the centre of the village. The beautiful Shore Temple towers over the waves, behind a protective breakwater. Sixteen man-made caves in different stages of completion are also seen, scattered through the area.

Mysore
Known as the city of Palaces, Mysore has never failed to mesmerise the tourists with its quaint charm, rich heritage, magnificent palaces, beautifully laid-out gardens, imposing buildings, broad shady avenues and sacred temples. Mysore has emerged as a thriving market for exotic sandalwood & incense, the Mysore silk sarees and stone-carved sculptures. On the outskirts of Mysore, Srirangapatnam still harbours architectural gems from the days of the great Indian hero, Tipu Sultan, and the magnificent Hoysala temple of Somnathpur lies little more than an hour's drive away.

Udaipur
Udaipur is known as the Venice of the east. Known for its picturesque lakes, Udaipur is also called 'the city of lakes'. The elevated hills and the beautiful lakes make a picture-perfect backdrop to the Udaipur city. Udaipur is regarded as one of the most romantic cities of the World. The city has many more attractions that catch the attention of the tourists with their charm. The massive forts of Udaipur, grab the interest of people with their sheer structure and architecture. The beautiful temples create a sense of aestheticism with their spiritual ecstasy. Udaipur also boasts of various museums, palaces, gardens, monuments and colorful festivals that allure tourists to visit the city for once.

Varanasi
The most sacred stretch of the Ganga is at Varanasi, one of the oldest living cities in the world. For more than 2,500 years it has attracted seekers and pilgrims. Varanasi is especially known for its fine silk fabrics. The Ganges or the Ganga River is one of the greatest attractions of Varanasi. Devout Hindus make pilgrimages from all parts of India to bathe in the Ganges, whose water they believe to be sacred. Every year, over a million pilgrims visit the city. Varanasi is also known for its large temples and its monasteries and palaces.

Early morning visit the Taj Mahal at sunrise, on decorated Tongas (Horse Carriage). After breakfast drive to Pink City Jaipur, en route visit the deserted Red sandstone city, Fatehpur Sikri Built by Akbar the Great in the 16th century to serve as the capital of his Mughal Empire before it shifted to Agra. Arrive Jaipur check in at hotel.

We are a top Destination Management Company in India with local offices throughout our vast country. Our team is knowledgable, experiences and made up exclusively of people who know India and have years of experience in planning and delivering itineraries which capture the essence of the country.

You and your clients would be in safe hands with us. Our team is dedicated towards offering you the very best service.